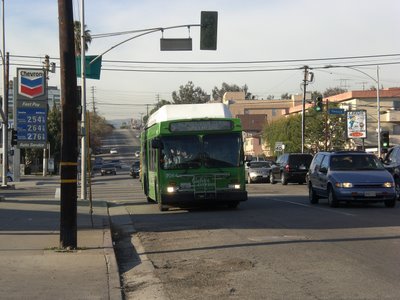 The Mole reads the papers (and other things) so you don't have to
The Los Angeles Times featured a piece on the “Beverly Hills Subway”(1). The article serves as a perfect example of the piecemeal thinking that dominates local transit planning. The writing also exemplifies the fuzzy logic employed by the Los Angeles Times and its staff. It describes the “13 mile subway that would [sic] travel between downtown Los Angeles and Santa Monica”. Actually, approximately 3 miles(A) of the Red Line route, between downtown Los Angeles and Wilshire and Western, is extant.

A Fair Study of Fareboxes

On Sunday 2 Dec. 2006, at around 11:15 or so I rode bus number 11033 on line 232 bound for Long Beach. The fare box was out of service. We pulled over on Mariposa and a “repair technician” boarded the bus, poked and prodded the farebox for under five minutes and gave up. At the same time we had a driver exchange. I watched as First Transit operator 71590 took over and although the farebox was still inoperative, he collected $3 for a day pass from a passenger. I verified, by asking the passenger directly, that the cash was exchanged hand-to-hand. This is definitely against Metro work rules –
I don’t know the rules under which First Transit operator’s work BUT, they are most probably the same as Metro’s rules. Do you think he turned the cash in? we will never know! Here is the gist of an e-mail message, with minor redactions, which I sent to the company which makes the fareboxes which are used on Metro buses. I’ll let you know if they answer me, but don't hold your breath.

Dear … Company:
I am writing to you as an engineer who has comments … These comments involve the frequent Metro loss of revenue due to … fareboxes, supplied by you being out of service. I would very much appreciate your reply so that I can reference it ….

I have personally seen a single attempt at field "on the bus" repair, which failed.Anecdotal "evidence", indicates that the older fareboxes seem to be more reliable than the newer type which incorporates the "Tap Pass" (proximity) feature. The failures which I have documented are: jammed bills, coin slots which must be frequently cleared - if clearable at all, thus delaying the boarding process, because they can not accommodate the usual rate of input when more than a single coin/token is involved in the fare payment. Too, it appears that if the on-board radio system is out-of-service, then, since asynchronous operation is impossible, then the farebox will also be inoperative.Could you suggest a reason as to why the LACMTA Metro be experiencing such a loss of revenue? Is it:The lack of skilled LACMTA Metro repair technicians?;Failure of the LACMTA Metro to perform routine preventive maintenance?;An infrastructure, potholed streets and etc. which subjects the fareboxes to stress levels beyond those anticipated by the engineering design specifications?;

Thank you and best regards,
Ear to the Rail
If you like Hip hop then copy and paste this URL (Universal Resource Locator) http://66.111.216.148:9975/ into your computer’s media player, e.g., XMMS (Linux) Right mouse button, select URL or Windows Media Player (Windoze) Right mouse button->File-Open URL. There are no commercials!
The Mole Rides Again - so that so that you can pick up fashion tips from people you would, given any luck at all, not normally meet
I like the Culver City buses too! They are usually cleaner than Metro buses and the drivers often give informative announcements at stops, including which Metro and Big Blue Buses intersect the line.

Riding a 232 Line bus headed to Long Beach.
The old man claimed the front seat on the right side of the bus and a good part of the seat next to his. The seat faced inward so his wheeled cart and his extended feet made navigating down the aisle a challenge for most other passengers. He wore thick glasses, occasionally picked his nose and mostly slumped with his chin on his chest.

He wore an unlabeled baseball type cap, while his 50+ inch waist turned his T-shirt into a belly shirt. Which waist bounced slightly off beat to the rhythm of the bus.

Under the rubric “The World Is My Garbage Can”:

A neatly dressed woman boards the bus, takes two steps and drops her used tissue on the first flat surface she encounters.

At the LAC City Bus Center another woman tears open a resealable package of something, drops half of the top of the package and makes a half-hearted toss of the other half toward the trash can. Although it is only about an arm's length distant, she misses. A minute later she tries again, this time with a used “scratcher” lotto ticket. Damn! Missed again.

I board a Big Blue Line 3 Bus behind two {scruffy} looking men. The older one has his McDonald's $1 sundae semi-hidden in his jacket pocket. I notice that as he converses with the younger man, his voice is very weak – laryngitis? emphysema?? cancer??? As he finishes his sundae, they are joined by a woman who is attempting to exceed the average, by producing 180 words per minute(2). Although, difficult to follow, she seems to know these guys and is telling them about either (i) her father's attempt to sell the house or (ii) her father's denial that he is attempting to sell the house.

27 November 2006, at about 11:30, I ride a 323 line bus number 11039. The driver of which is busily involved in a conversation with a man, on her “push to talk” cell phone. The conversation is interesting only in that it raises the concern that less attention is being paid to driving. [See (2) below.] This driver, like many First Transit drivers, uses the accelerate and brake method. A technique which demands that she first accelerate to close up any space in front of the bus, then brake heavily. It must be a function of the training they are given by First Transit. This rolling motion puts one at risk if not seated and even then will flush out those with motion sickness.

A quick study of the LAX City Bus Center.

The LAX City Bus Center is fairly large. I estimate that the main area, where people wait and which encompasses the fifteen (15) “bays” (places where the buses load and unload) is approximately 100 metres by 20 metres, for a total area of 2000 square metres. That means that 16 meters separate each bay. It is big and lots of people wander around trying to figure out how to get where they are going. Most times, very simply, they are out of luck. Oh they will find people to give them directions, see the prior entry on how a Metro bus driver misled a lady traveler who wanted to get downtown by bus, and lots of times the directions will be just plain wrong.

The Metro aka “America's Best”, is no help! The kiosk in which they have posted large sized bus schedules is either years out of date or the schedules have faded past the point of readability. The area is large, the bus stop signs are usually too brief to be informative and most users only know their own routes. Culver City Bus provides a nice rotating schedule device, but their inbound and outbound stops are widely separated meaning that some people jump on a CC 6 and end up at Aviation Station and must pay another fare to get to Culver City. Big Blue Bus has posted schedules at the kiosk but those schedules pre-date their Rapid 3 route, and are therefore inaccurate.

I have pretty much given up helping people there because (i) I don't often have adequate time and (ii) when I do have time and give explicit accurate directions the explainee will then be seen asking other – often less knowledgeable people – in an attempt to develop some sort of travel calculus which is unfathomable to me. So I remain uninvolved, as I listen to people being directed to Century City Shopping Center on the Big Blue Bus when they really want to go to Fox Hills Mall which is accessible by the 439 using their day pass. The LACMTA have the most bus lines serving the LAX City Bus Center, but inexplicably, given that they are “America's Best”, they do not take the lead in improving information at the site. They can't seem to keep it clean either and their own drivers carelessly toss burning cigarettes into the street at the conclusion of their breaks.

(A) This distance was developed using MapQuest.com