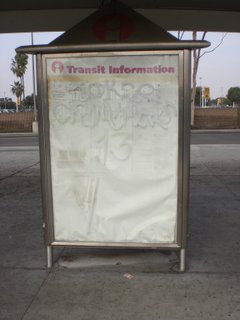 Pictures will help tell the story in this first post of 2007. Molette gave me a digital camera for Christmas, she knew that I would never take my Nikon film camera on "bus rides" and turning film into jpgs is NOT fun. So, here are some pictures which will to help illustrate exactly how little the LACMTA deserves being called “America's Best”.

The picture above shows the less than helpful kiosk at the LAX City Bus Center, which has long ago faded to unreadability and now server as a backdrop for grafitti. This side pictured is unreadable, the other two sides display schedules which are out of date, some as much as three (3) years!

A left mouse click with the cursor over any of the pictures will enlarge it, with some systems, clicking the enlargement once more will yield a final larger resizing. N.B. All photographs are copyrighted by LaMetroMole :-).

The picture below shows the new shopping center, Plaza El Segundo , at Hughes and Sepulveda, just south of El Segundo BL and north of Rosecrans BL. The shopping center is open now and has been for a while. But, there is still no bus stop nearby. The shopping center is on the “loopy” 232 line route – you remember it, don’t you, it loops twice between Grand and Mariposa on Sepulveda, wasting time, money, fuel and tires in doing so. In keep with the reputation of “America's Best”, the LACMTA planning department has been unable to plan for a bus stop at this already busy venue.

Now if the LACMTA were truly “America's Best” they would ensure that EVERY BUS would have advertising cards which promoted http://www.babysafela.org/ . Doing so would potentially save the lives of some unwanted newborns. But no, they prefer to blow their own horn with an unending series of advertising cards telling us that they are “America's Best”. I believe that I have seen the “Baby Safe” notices on Foothill Transit buses. Data which are available on the site referenced above, shows that 11 babies have been safely surrendered so far this year. Four of the six babies abandoned this year have died. If only one more baby had been saved, it would have been more than worth the printing cost.

Rather than perform a needed and useful public service, “America's Best” would rather show a picture of a driver who has been kissed by a delighted passenger – yeah right!

In what I see as a payoff to newspapers for fluff coverage, the LACMTA took a larger than half page self-congratulatory ad(1) in the Los Angeles Times. They must assume (wrongly), that this is cost effective because most their riders get their news of schedule changes from the Times. The schedule change information was available in Metro publications 07-0106TR and 07-16320W which were available on some buses in advance of the change. Although, on the date of the schedule change, few buses actually had “America's Best” new schedules available.

In another Times piece(2), they not only cover a Blue Line accident – the train struck a fire truck causing 25 injuries – but expose an assistant fire chief's lack of proper grammar, viz., “... notorious bad ...” vs “... notorious ...”.

The Times also documents(3) further proof that the LACMTA couldn't plan its' way out of a wet paper bag. In an incident that is reminiscent of the rebuilding of the pavement at the Patsaouras Transit Plaza, when it began to deteriorate due to the constant pounding by buses, we now find that the “money saving*” Orange (bus) Line's asphalt "busway" is crumbling. On my first ride shortly after the Orange Line opened I pointed out that the pavement was not level, that it was wavy. Presently, as the article tells us, the LACMTA and the Shimmic Construction Company/Obayashi Corporation are engaged in a he said-he said argument as who is to fault. Call me simple, but I believe that if a project doesn't perform up to specifications or expectations then the contractors are at fault. But our generous LACMTA is splitting the estimated $1.5 million cost of repairs with the contractors. The cost to the generous LACMTA will be $750,000 or expressed as standard bus fares, it will take the $1.25 payments of 600,000 (yes, that's six hundred thousand) Metro riders. Oh, and that is just for about a mile of failed roadway, with more failed miles and wasted money ahead. If only they had graded and constructed a proper roadbed in the first place then they would be positioned for a fairly rapid conversion to light rail, if and when necessary.

The LACMTA Marketing Department wasted more money on the “Go Metro 2006 Shopping Guide” 07-163EB. Said Marketing Department is so out of touch with reality that they think that their ridership needs such a publication in order to be able to do Christmas shopping. What a waste! While we're laughing, “Discovering Los Angeles Away We Go!” (No identifying number) is more money down the rat hole. This expensive looking full colour piece is devoted to selling discovering that part of Los Angeles covered by the subway/light rail lines. This is the kind of piece that likely looked just great to the committee which selected “America's Best”, but is near worthless to anyone else – well, maybe a few tourists could us it. Then there is the “Metro News” for December 2006 (07-11711TR) which by some unexplained calculus, determined that speeding up some Gold Line trains by 5 minutes “... means that you'll spend about 30% less time waiting for the train to arrive”. I calculate the speedup as less than 15% of the total travel time end-to-end.

Two cheers for the City of Pasadena who, finally, installed trash cans at the busy bus stops on the Lake St overpass of the 210 Freeway. Your Mole lobbied long for this (over one year) and due to his nagging or not, they are in place – although the bus stops are much cleaner, the street next to the curb is still plenty dirty.

Big Blue Bus cleaned up the Maxella AV bus stop on the East side of Lincoln BL in Marina Del Rey – but still no trash cans. Even they are not America's Best in this category as shown by the photo below. It is a picture at the subject bus stop showing one of the uncapped plastic pipes at the base of power poles, which are litter magnets. These pipes were not cleaned out, are becoming fuller by the day and remain uncapped. Big Blue Bus, please have your maintenance people meet the power people at this site, then clean out the pipes and have them capped.

Strangely, the Metro bus stop at the southwest corner of Manchester/Sepulveda is noticeably cleaner, too.

A new world-wide news agency has begun operation. Starting late in the fourth quarter of 2006, France24 is available on the “web” at http://www.france24.com/. You can read the news in French or English. Better yet, you can watch videos of their coverage. What I especially liked, was a button on the video player just to the left of the speaker icon (an arrow pointing to the northeast), that when activated just after the video begins, changes to full screen mode for a TV-like experience. The site is nicely designed with story categories displayed at the top of the home page, from about mid-screen to the right margin. The “Meteo/Weather” button causes an animated traverse of the world showing current temperatures and conditions for major cities. Whether judged technically or journalistically, this site is highly professional! Easy on the eyes, too (if you have the opportunity to see Ms Antoine reporting).

One could view it while riding a bus, if one had a wireless card from a cellular supplier. But most of those who have such cards aren't riding the bus :-). It certainly makes TransiTV look like what it is, amateurish.

The Mole Rides Again - so that so that you can be exposed to alternative forms of “healing”.

A man board my bus with two huge rip-stop type garbage bags stuffed with recyclables. He manages to brush them against most aisle passengers with them as he makes his way to the rear of the bus.

I am on a Big Blue number 3. A passenger, with yellow marking pen writing on his clothing and whose 3 foot by 4 foot sign advertises him as an “intuitive healer,” with 19,000 healings to his credit, boards the bus at the LAX City Bus Center. He tells an interested fellow passenger that his signs last about six months before being lost, broken or stolen.

I noticed a bus driver from the 439, a short Oriental man operator number 14222 feeding the crows, pigeons and sea gulls at the LAX City Bus Center. He was tearing his sandwiches(?) into bits and scattering them. You know how I feel about people who force the juxtaposition of birds and people – I am not for it. The LAX City Bus Center is filthy enough without anyone, especially a Metro driver, making it worse. Then I saw the trash truck pick up and dump a trash bin. That was fine, except they did not clean out the trash bin area, leaving some areas knee deep in garbage. 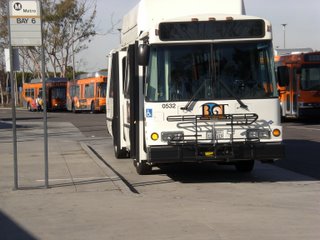 Poor BCT (Beach Cities Transit). They were probably told that hundreds of people would ride their 109 line which was to take up some of the slack caused by the truncation of the Metro 439 line. It doesn't seem that way to me. I have yet to see more than a scant handful of people board it at the LAX City Bus Center. Perhaps more people board at the Green Line Aviation Station – for BCT's sake I hope so.

Then they have the stop for the BCT bus that refuses to arrive. Located just north of 96th Street and Airport BL (below) it must have been setup based on misinformation. BCT, you could move this sign to the LAX City Bus Center in place of the small temporary one in place there now. 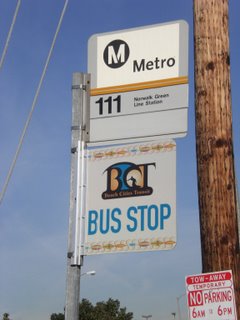 Just across the street we find the “haunted bus stop” (below), haunted by a homeless man who seems to live there. It seems that, for obvious reasons, few people wish to share the bus shelter with him.

* The LACMTA (Zev et. al.) were bragging about how economical busways were when compared with light rail.