The LAX City Bus Center Kiosk, shown below, is all that is available to residents and visitors who arrive here and want to take a bus to various parts of Los Angeles. The posted schedules are either completely unreadable or out of date. On my last trip I assisted two Swedes and two Australians find a route. Perhaps Snoble himself or his highly paid PR guy should spend some time here and take a survey, as I have, and find that most visitors would NOT describe our “Metro” as “America's Best”. 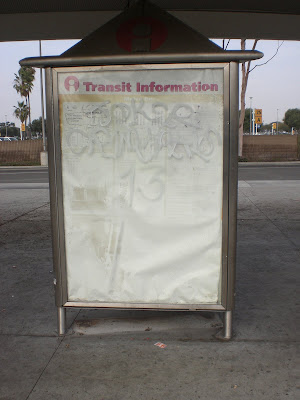 The photo above is more than adequate proof that the LACMTA spends more time and MONEY in self promotion than it does in improving the transportation experience for its’ riders. I challenge the LACMTA to stop being hypocrites and to make a real effort to rectify their presently false claim, that they are as “America's Best”.

Mayor Villaraigosa's plan to make Wi-Fi widely available in Los Angeles, as reported by the Times(1), might make Internet access possible from buses. The article does not cover such usage and in fact, “flicker free” roaming Internet usage may be impossible. By that I mean having your connection seamlessly transferred as you ride into areas covered by other antennas. Unlike cell phone conversations, which cover the eventuality of a caller moving between cells, providing the same level of Internet service may not be economically feasible.
Our local paper illustrates the negotiating skills of the LACMTA’s top negotiator(2). Basically, the LACMTA is giving away $190,000 worth of services. The will receive $75,000 for services worth $265,000. They will recoup only 28.3 percent of the total value.
What a deal! Oh, the $190,000 “give away” to the for profit Marathon is equivalent to the basic fares of 152,000 transit riders. Oh well, as they say around the LACMTA and the Board of Supervisors: “It’s only money”.
The Times covered the “crumbling Gold Line”(3). Why should we be surprised that structures which should last for decades, start falling apart in a few years when the LACMTA is in any way involved. Check out the article using the link at the end of this posting and you can also see some interesting pictures. It turns out the contractor was the same one that worked on Boston's “big dig”, a portion of one of the tunnel roof fell killing a motorist. Here I will only cover the three issues from the piece which jumped off the page at me: (a) the estimated cost to fix the problem is only $50,000 (I wanted to make the $50,000 figure flash and pop up a balloon that said “LOW BALL” – but I didn’t), i.e., the basic fares of 40,000 metro riders – this is in spite of the fact that no one yet knows exactly what is wrong; (b) NOW, they are hiring an engineer to try to figure it out. One would think that the design engineers could immediately tell us what is wrong.
It brings to mind the time period several years ago when the LACMTA was soliciting us, by means of on-board advertising cards, to report any stories of “waste, fraud and abuse” on their projects. Looks like they missed one. (c) Here is a quote from Rick Thorpe, the LACMTA’s chief capital management officer about the chunks of concrete which are falling from the Gold Line structure: “There was no safety issue [your Mole supplied the bolding] associated with it, so it didn’t get the attention it should have”. The LACMTA is going to pick up the full cost of this repair (the deal must have been negotiated by LACMTA’s second best negotiator).

These losses likely end up in the Funds programmed to others accounting category on the financial reports. I would suggest another rubric, “Stupid wastefulness”.<\P>

Ear to the Rail
In keeping with the theme of MP3 listening while commuting by bus, here is a link to “On the Media”. As a news junkie I like the site BUT, don’t listen unless you have understanding of the topic. Some things, like the “Friction Tape” of a few weeks ago, covered a soldier’s death in Iraq. It is Not easy listening!!

Another, politically oriented piece: “A Zion in the Sand” starts off – “Criticize Israeli policies, and you’re likely to be tarred an anti-Semite …Visit” .

Listening to NPR one early morning, I heard them discuss Liza Martinelli's book, “Oil on the Brain”(4). Ms M points out that only 12% of the world's population owns cars. The Chinese are attempting to address the majority by manufacturing small, inexpensive “global warmers” for the 88% who don't own one now.
The Mole Rides Again - so that so that you won't be left on the curb, giving rude hand signs to the fast receding driver who decided that you were not at the bus stop.
While riding a 115 Line bus on Manchester, I watched a white haired elderly man run toward a bus stop waving his hands as clear indication that he wanted to ride. He was about a bus length (40 feet) away from the bus stop and had the operator stopped there he would have likely been half a bus length away when the bus arrived.

On 12 February, I am riding bus number 5302 on the 439 line headed toward the LAX City Bus Center. The operator, whose ID is 10498, seems to be spending lots of time on his cell phone. Let me understand, an automobile driver will be fined for using a cell phone while driving, but NOT a bus driver??

I am using the 304 Line, riding down Santa Monica BL, while the woman across from me rocks back and forth while bobbing her head to music unheard by the rest of us. She stands up, walks to the schedule rack and stuffs several handfuls of schedules and notices of schedule change into her shopping bag.

I meet a lovely young Brazilian woman on board a Line 108 bus. Her name begins with a “G”. I suggest a route for her and ask her about the buses in Brazil. She likes our AVA (Automatic Voice Announcements) which alert passengers to the next stop. I agree that the AVAs are better than the old way of “hit and miss” announcements based upon whether the operator feels like making them or not. I don't tell her about the many mistakes in the announcments and their ambiguity. I made a mental note to include information about the way bus announcements are made in Japan, which follows.
In addition to the announcing the stop, in Tokyo, information about important destinations in the area, e.g., hospitals, transfer points for other buses and etc. is included. Why doesn't “America's Best[2006-2007]” implement these “best practices” from home an abroad? My answer: In business I find that people with lower levels of ability are often less likely to trust professionals and more likely suffer from the NIH (“Not Invented Here”) syndrome. Basically, the LACMTA thinks that if they didn't come up with the idea, it is no good. Second opinion? Why doesn't our own “America's Best[2006-2007]” include additional information in the AVAs? Because “good enough” is perfect to them!

While I am on the topic of Japanese public transportation, here is a link to a picture of the type of fare http://www.kotsu.metro.tokyo.jp/english/images/bus/farebox.gif box. It changes bills, issues change and etc.

The Japanese thinking is: The fare box must operate because it is our means of collecting money for our services.

Late on a Sunday morning and I am headed for LAX to fly out to next week's project. I pause at the LAX City Bus Center where a Metro employee is hard at work with a high pressure hot water/steam hose. He is cleaning the blobs of discarded gum which dot the area. I seems that he can remove about four blobs per minute. At that rate he has his work cut out for him. A quick survey finds that the blob nearest a waste can is about half a hand span away – just inches!.

I applaud the LACMTA for at last taking action to clean up the area. However, cleaning should be coupled with some form of policing which issues citations to those who litter. But then, incomplete thinking is the hallmark of the LACMTA. Now, I am waiting for them to replace the faded information sign (see the photo posted above) and other outdated materials at the kiosk.

I reviewed the cleaning progress a few days later and was disappointed to find that very little of the area had been cleaned.

I have boarded a 232 Line bus and shortly afterwards, a man who has the look of homelessness about him gets on. He takes a seat and begins removing not-so-clean twisted lengths of fabric, which may be/have been some type of garment, from around his neck. He stuffs them one by one into his back pack. Like a magician with a string of handkerchiefs, he seems to have large, but not limitless, of these scarf substitutes. His shoes are well worn and of the style that one can see on runners in films of the 1932 Olympics. I inventory my vocabulary for a descriptive adjective, other than “scruffy”, but fail.

Mole’s Copyright Statement
All photographs and original written materials are copyrighted © 2007 by LametroMole. Clicking a photo will often present you with an enlargement.

Fair Use Statement
FAIR USE NOTICE: This site contains copyrighted material the use of which has not always been specifically authorized by the copyright owner. We are making such material available in our efforts to advance understanding of environmental, political, human rights, economic, democracy, scientific, and social justice issues, sustainable development, environmental, community and worker health, democracy, public disclosure, corporate accountability, and social justice issues, etc. We have included the (line thru full text \line thru) [relatively brief quotes] of the [from] articles and etc. rather than a simple link because we have found that links frequently go "bad" or change over time. We believe this constitutes a "fair use" of any such copyrighted material as provided for in section 107 of the US Copyright Law. In accordance with Title 17 U.S.C. Section 107, the material on this site is distributed without fee or payment of any kind to [all].those who have expressed a prior interest in receiving the included information for research and educational purposes. If you wish to use copyrighted material from this site for purposes of your own that go beyond 'fair use', you must obtain permission from the copyright owner.