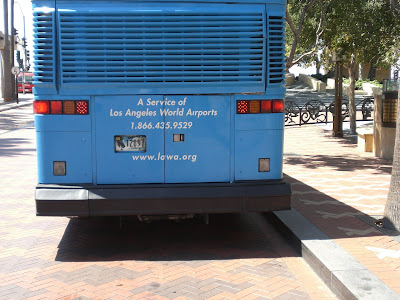 The photo♪ above, taken at Union Station shows that, in spite of over a year of operation, some of the Flyaway buses still have Wyoming license plates. I am not exactly sure about the law and how it applies to LAWA (Los Angeles World Airports), the Flyaway owner?/operator) but I do know that no civilian (that means “regular people”) could get away with out of state licensing.

In what appears to be a stealth move, Flyaway fares have been increased from $3 one way to $4 and from $6 round trip to $8 which means there are no savings to be made by purchasing a round trip ticket. Keeping with the LACMTA's focus on convenience inconvenience, fares must be paid in cash, no credit cards accepted. LAWA seems to keep an EXTREMELY LOW profile and have ignored my several attempts to communicate with them. As a result I am unable to contact Ms Gina Marie Lindsey the LAWA Executive Director to hear exactly why they: (a)continue to license their buses in Wyoming?; (b) Why they don't offer even a small inducement for round trip ticket purchasers?; and ( c) Why they don't offer travelers the convenience of allowing ticket purchases using a credit card?. My guess at what her answer might be? “It is not our policy ...”. A tip for Ms Lindsey, you can hide but eventually you will have to speak up for your organisation. Then too, if we had an aggressive newspaper in town ... .
The Mole reads the papers (and other things) so you don't have to
A Time's piece(1) talks about the loss of transportation funds from the State of California. I summarize the article as schools or transportation? I vote for schools!


Another article(2) in the Times describes how a Metro driver is killed when his bus was struck by another vehicle. This is sad but the function of some people is to teach us how NOT to do it – he wasn't wearing a seat belt. Careless drivers such as this one apparently was, also put passengers in jeopardy when the lose control of their bus!


Another Orange Line crash is detailed in the Times(3). Even with controlled crossings these accidents continue to occur and will do so ad infinitum.

Needed or not and definitely without the proof of concept that using buses for nine (9) months on the planned route would provide, we learn(4) that the Expo Line Construction has begun. Although I like the Gold Line which has not fully lived up to expectations, it may still do so when it is extended to the east. The Expo line will only achieve a passenger load, if it ever does, by siphoning passengers from the 33/333 lines on Venice. Poorly conceived, the Expo line will be slow and a magnet for accidents (vide supra). I firmly believe that the LACMTA should have gone full speed ahead on the Red line (I know, I know, tangerine line) extension and made that the backbone of cross town transportation. Then, “ribs” of north-south bus transportation could connect the backbone to other lessor east-west bus service or rail lines. More on this later.


The International Herald Tribune web site(5) covers the launch of yet another innovation on rails from Japan –- one that is said to reduce global warming. Using a diesel engine and batteries which are recharged by the braking energy of the train. The train, Kiha E200, went into service in central Japan at the end of July. All the while US companies, using a tactic that can only be successful in the short term, are trying to to make money by using China's low labour costs.
Ear to the Rail
In researching, I found the web site for King County Metro in the Seattle area. Their mission statement, my words, is inserted below.
"Service, above all else" is a guiding phrase that describes how [King County] Metro values its customers. At Metro, virtually everything we do revolves around the customer; listening to their needs, giving them optimal service, and going the extra mile to meet their travel needs. You'll find all of the important ways to contact Metro in this section.”
According to the web site, fares only support about 20% of expenses, which is less than the 24% which our LACMTA complains about, yet their service appears good. You can see a map of their service area at: http://transit.metrokc.gov/tops/bus/area_images/SystemMap_607.pdf
Their web site has a clean design, is easy to navigate and provides lots of useful information. They even show you how to save money by purchasing your pass with pre-tax dollars in cooperation with your employer. Please check out this link and see if you can save money in spite of the LACMTA.
http://transit.metrokc.gov/cs/employer/pdf/ps-pre-tax_brochure.pdf


Could I have found the real America’s Best?
The Mole Rides Again – so that you don't have to watch full buses pass you by and wonder if anyone cares. Stop wondering, they don't
I am standing at the corner of Manchester and Lincoln. The group waiting for a 115 bus has been growing. After the third (3rd) full 115 passes us, we number about 40. Most of the group are students or at least I make that determination by noting that they are carrying textbooks.

In a case like this, rather than stranding passengers, a company that was truly “America's Best” would have their drivers stop an hand out muni transfers so that people could ride a BBB (Big Blue Bus). But not our LACMTA! The wait approaches one hour with the next 115 due after another 30 minutes. Will it too be full? I give up and although I have a pass, pay full fare on the next BBB. The people who paid $5 for a day pass are likely unhappier than I.


Does anyone at the LACMTA attempt to evaluate service? Are the drivers on the 115 Line and other lines reporting the fact that they are stranding passengers?? Does anyone at the Taj Mahal have authority to take action to do something??? My guess at what the answers might be? “NO, NO and NO!”.

Your Mole doesn't want to claim credit for actions that he didn't influence but ... He noted that, at long last, the 264 line has been routed conveniently through the Sierra Madre Villa Gold Line Station – this, just years after the Mole's first complaints about having to walk close to two blocks from the old inconvenient stop in rain, heat or cold. It is a start but, they could do lots more to improve connections, that is if the LACMTA wanted to do so. Also noted, that so far, all the out of service fare boxes which he has encountered have been draped with orange safety vests -a best practice? This allows people to figure out that the fare box is out of order (again) and speeds up boarding and saves the driver's voice.

This is my worst line 439 ride ever! There are fewer than ten passengers aboard, but there might have been standing room only given the noise level. The woman seated behind me shouts back to another woman seated three (3) rows behind her, kind of arguing about something: “... I drive and you don't! ...”. The volume of both the TransitTV and the ASA (Automatic Stop Announcement) are set at maximum volume. The woman seated directly across from me repeatedly and unsuccessfully tries to call a “tree service” using her cell phone. The man seated directly ahead of me chats with the woman seated across the aisle from him about their children who are about to enter college this fall. All the while I try to read my book about the Middle-east – an impossible task under these conditions.


Here it is just days after a Metro driver is killed while not wearing his seat belt and I am aboard a 333 line bus, number 6563 just after noon on the day . The driver, operator number 29822 is flying westward on Venice BL and NOT wearing a seatbelt! Note to the LACMTA, if passengers are injured in an accident under these conditions, punitive damages should apply.


I am just about to enter the Mariposa Green Line station when I encounter four people who are trying to decode the ticket machine. I assist them, suggesting a day pass. The are tourists from the US Virgin Islands and since I am headed to Pasadena, I offer to see that they get to 7th/Metro station and then on a "Puce" Line train to Hollywood and Highland station. The family are interesting, a husband and wife who are traveling to Australia with their two college age daughters.


He is English, so we have an interesting discussion: Murdock's purchase of Dow Jones, Beckham's move to L.A., he tells me about business in the US Virgin Islands and also the British Virgin Islands. ... .


Another 439 ride, during which I meet a student from Sofia, Bulgaria. I tell him about bus passes –- he is working here for a month and he tells me that buses in Sofia are usually full and cost the equivalent forty cents US for a ticket since there are no fare boxes aboard. He also says that espressi costs ten cents US, smiling as he describes his job at a coffee chain store here.


I ride a line 180 bus from Pasadena to the Red Line station at Hollywood and Western. The a man joins the man who was seated across from me. Apparently they don't know each other but immediately begin exchanging credentials. They trade dates and circumstances upon which the Holy Spirit visited and inspired them. The cite evidence as to why God is in direct support of them. The demonstrate their knowledge of Biblical passages and use these passages to bolster their various points. The entire conversation is conducted mostly asynchronously, i.e., both talking at once, in what to me, is a game of one-ups-manship. There is no eavesdropping on my part, these guys are broadcasting. I am developing a headache and am convinced that soon blood will trickle from my ears.

I transfer to the Red Line. Surprizingly, the announcements border on understandability and the operator tells us which buses are available at a given station. I only wish that they would STOP saying “The next station stop is” and say “
# posted by LAMETROmole @ 12:01