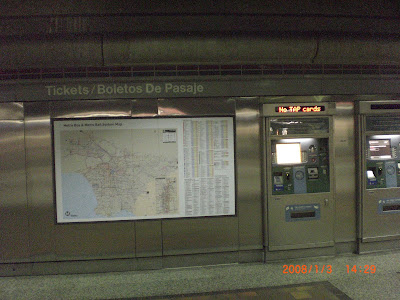 This picture♪ shows the ticket sales area at the 7th/Metro Station. Note that minimal information is available to the potential passenger. Well, there is a nice big map, but, in order to make sense out of it one would have to have excellent eyesight (I believe that the type size just below the one used is Braille) and a very good idea of how the LACMTA “system” is laid out. Or, someone there to explain how to use the “system”. If you are a visitor –forget it! There is no usable map or fare explanation. Here it is better to show an example of effective communication in transportation and as usual with your Mole, he will use Japan as an example.

Here is a nice picture of the typical situation found in a Japanese subway or rail station.

First, read this description then open the picture. Then note the level of the lighting, i.e., bright, not the gloomy situation depicted in Los Angeles, above. Also, although the schematic map above the ticket machines is not in English, you can still understand that one can plan a route using the map, including the use of transfer points to different lines. On the schematic map, each station has the fare inscribed above the station name, the amount that is required to travel from “this station” (read point of origin). On the map, you can see “this station” denoted by the red arrow indicating “you are here”, in this case “Yokohama”. Oh, and the head which is protruding from the panel is simply a support person who will respond to a bell if a coin jams, etc.

This is what we should have here, but because the LACMTA has a build then design philosophy and since the builders were ignorant of best practices, this ignorance then became their legacy to the “maintainers”.

Last month I discussed the poor communications job which the LACMTA does informing their ridership about subway/rail ticket limitation. Here I take another look at the red/purple line interface between Union Station and Wilshire/Vermont. If you should change trains to one with a different destination you would be in violation of the one ticket one train policy. This is technically s loophole in the LACMTA's plan and one which they have not yet addressed. You're surprised??

The LACMTA's web site offers PDF (Adobe's portable data format) schedules for the various routes. Exemplifying the agency's inability to think outside the box, these schedules are basically the same as the printed schedules. There is no reason to be limited to that format, by being so limited, they miss the opportunity to extend the information to passengers and prospective passengers. I suggest the the PDF files include a complete list of all stops on the route along with a list of the ASA (Automatic Stop Announcement) text if such announcements are made on the subject line. N.B. These two items are frequently not identical. Further, the print schedules should include a symbol or the letters ASA if ASA is available on board.

In the same area, I believe that every bus should have a large poster of the same information the I suggest for the PDA files: map; list of all stops; ASA and etc. That way, and this is the case two weeks after the 2007-12-16 scramble of routes, few printed schedules are available on board buses, passengers could better plot their trip.

The Mole reads the papers (and other things) so you don't have to
My criticism has often extended to the Los Angeles Times for what I consider weak coverage which is totally lacking an analysis of the $3 billion per annum mess called the LACMTA. But, after reading an excellent piece(1) in the New Yorker, the Times, at least the Times employees have my sympathy. The article paints a not very flattering portrait of Sam Zell, the $6 billion real estate dealer from Chicago, who now owns the Tribune Company and its wholly owned subsidiary, the Los Angeles Times. Do check out this eminently readable, lengthy article as it has a wealth of well researched detail. I will simply say two things: (A.) Zell specializes in paying the absolute minimum corporate income taxes –which is not a crime, usually and (B.) the Tribune Company purchased the Times in 2000 for about $8 billion in stock, which is about the same amount, if not mode of payment, as Zell will pay for the Tribune Company. Which purchase involves the Tribune Company becoming a sub-chapter S corporation (fewer interventions by our pesky government, no doubt) and taking on lots of new debt –$13 billion. The employees, in an interesting application of an ESOP (Employee Stockholder Ownership Plan) become the owners of the corporation, this may not be as nice for the employees as it sounds. Rupert Murdock is another tough businessman who owns newspapers. The difference between he and Zell is that Murdock has long experience with newspapers and is essentially a newspaperman, Zell does not –is not.

The Los Angeles Times(2), opinion page features a piece critical of the LACMTA for building light rail. I found it interesting in that one reading, since the writing was BUS centric and the writers seemed to think of a transportation SYSTEM in which BOTH BUSES and LIGHT RAIL play a role, is that this is a proposal for a proposal. One of the authors is identified as a 'Transportation Consultant”. They could work for either side, the BRU (Bus Riders Union) in support of their ridiculous buses only, ignore all other options approach OR be co-opted by the LACMTA, for perhaps an even higher fee, to remove them as a possible thorn in the LACMTA's side. Supporting your Mole's thinking is a large (taking more space than the text) picture which makes it a full page article, of a BRU fare protest. The protesters are identified NOT as BRU members or those organized by the BRU but, simply as “A crowd of bus riders”. Please read the opinion and draw your own conclusion. As for your Mole, he remains skeptical.

In contrast to the professional article above, a Times(3) columnist, features the ideas of amateurs on how to fix L.A. Public transportation. This is a lot less costly than actually performing a study of the situation and formulating a solution. Although I believe in generating ideas by brain storming, Nothing I read in this piece can be considered better than replacing the present LACMTA and replacing it with a professional organization. I will mention just one of the ideas contributed to this piece. It was the suggestion to use flood channels as the route for transportation. This is not necessarily a bad idea, it is just that it is extremely unlikely that the flood channel routes are a corridor that provides a sources of traffic –or destinations for that matter.

In another opinion piece(4) the Times prints various ideas for transportation. Again, I don't want to identify any of the ideas as bad, per se, but none of them seem to originate with true transportation professionals. The lead opinion writer is a writer for the Simpsons! An “organizer” for the BRU (Bus Riders Union), you remember them all buses and only buses seems to be their motto, asks for “reliable 24/7 service and a bus every five minutes”. He demonstrates a misunderstanding of basic economics and apparently feels that there are to few mostly empty buses now.

The three articles cited above clearly demonstrate what is wrong with the Los Angeles Times coverage of the LACMTA. They count these columns and opinions as if it were coverage. I will give them this, it does yield the most words for the lowest cost. In reality, what the Times gives us is NOT coverage. Nothing can replace a knowledgeable beat reporter!

The Los Angeles Times(5) shows that the LACMTA is equally inept in public transportation and its' administration of freeways, or should I say its' attempt to convert freeways to tollways.

We can read about the complaints(6) of those whose businesses are adversely affected by the Gold Line extension construction. Not one word appeared challenging whether the Gold Line extension is the best use of transportation funds, i.e., will there really be an adequate return on the capital investment? It East L.A. Really a source and destination of passengers in numbers not found in other areas. Because of the lack of transparency tremendous secrecy surrounding LACMTA and the details of how they spend their current $3 BILLION budget, we will never know. The Los Angeles Times weak coverage certainly isn't any help either.

Featured in the Daily News(7) is the “good news” that legislation holding promise for funding for the subway to the sea, vis., the Red Line extension to Santa Monica. The bad news is twofold: I. Iraq funding is also include in the bill, for which no Senate number was provided and II. With the current economic conditions which prevail in our country, I wonder if L.A.'s transportation desires will rate very high. We have the sub-prime mortgage problems along with the attendant SIV (structured Investment Vehicle) problems –SIVs were supposed to be a method by which the risk was spread but, now seems to be failing, along with organizations like MGIC (Mortgage Guarantee Insurance Corporation) and others who don't have the funds to pay off on the “guarantee”. Not to mention the fears of a general recession. In other words don't hold your breath.

On the afternoon of Christmas day I viewed a CNBC special(8), part of which was devoted to UPS. UPS is an organization that truly can be considered on of America's Best. The organization uses scientific methods, and a large compliment of Industrial Engineers,in its management. Just a few examples: drivers are taught to fasten their seat belts while starting their trucks; left turns are eliminated wherever possible.

Ear to the Rail
Those of you who have an interest in improving your understanding aspects of ... iTunes©, <http://www.itunes.com/> allows the free downloading of some education related podcasts of university lectures and etc. You will need to download the iTunes software, but the files will play on most regular MP3 players, i.e., an iPod is not required.

Here is a link to the CSPAN podcast area, which I found very informing. If it is available listen to the presentation by Amy Chua, a Law professor at Yale, who has written several books. In this broadcast she discusses her latest, “Day of Empire” http://www.c-span.org/podcast/ .