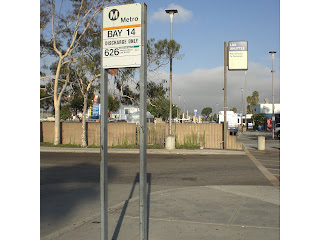 Mass Confusion Transit♪
I help someone find the 626 stop pictured above, yes it is the stop! Although the signage, as usual with the LACMTA, may be poor. In this case it leads one to believe that this is a discharge point only. 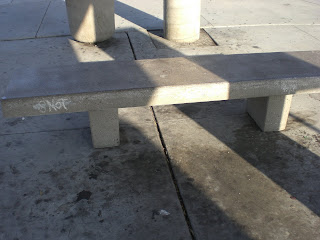 Dirty 1♪
Yes, the LAXCBC is filthy (click on the photos –above and below for a better view). There is a simple solution, however. It is a two-part solution. Part one involves supervision of the “worker(s)” on a frequent basis, not just allowing them to do “the best that they can”. 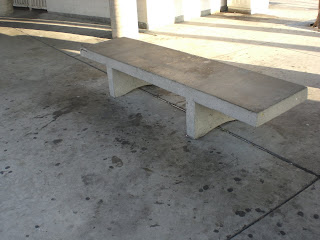 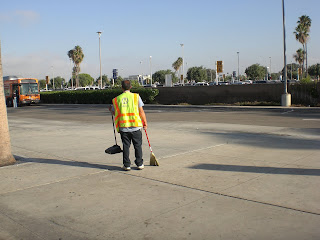 LAXCBC “worker”♪
Part two is organising the work. Which I will do for the LACMTA right here. Task (a) Compute the size of the centre island at the LAXCBC. No, no, I understand that it is an oval but there is no need to perform the computations using calculus! Just take the length at the longest point and consider it a rectangle. Task (b) divide the Length X Width by 22 the number of working days in a typical month. Let’s say it measures 240 feet by 40 feet, making it 9600 square feet. Dividing 9600 by 22 yields 436 square feet. That means each working day the “worker” need only take his long handled stiff scrubbing brush and bucket of soapy water and scrub a section which is 40 feet long by about 11 feet wide. To make this easier for him, we need to make a grid plan drawing of the centre island at the LAXCBC –this is Task (c). Each grid square will have a number, 1 … 22. Each grid square will be composed of concrete sections the sum of which will roughly be equal to 436 square feet. The grid will be posted on a wall in the central “driver’s restroom area” [too bad for the rest of us, right?] AND the “worker’s” supervisor will produce a cleaning plan for each month and distribute it to the “worker” prior to the beginning of the new month. For example, August 2010 starts on a Sunday. So the first working day is Monday the 2nd. On that day, the “worker” in addition to his (very) light sweeping, will scrub grid 1. On Tuesday the 3rd of August he will do grid 2 and so forth. At the end of the week the “worker’s” supervisor will inspect the five (5) grid squares which were cleaned that week and inform the worker about any deficiencies.

There it is, the LACMTA could have done this for themselves, yes? No, they couldn’t OR they would have cleaned up this disgusting mess that visitors to our country see daily!
Oh, one more thing, this Mole rides the bus and so can this worker. He is given the car, pictured below. That is so he can scurry about town doing the fine work he does. He can ride the bus too. Instead of giving the area a light, spotty sweeping then taking off to repeat that effort somewhere else, let him spend the full day at large areas and ride the bus to his reporting area or home and plan his week so that he can commute to nearby areas by bus. If they are afraid that he will not be doing enough work, let him clean the buses he rides.
I have nothing against workers! It is the LACMTA management who are sitting on their big fat chairs not getting out and supervising their staff!
If he needs supplies let the buses haul them in for him. They could be lashed to those front right wheel cover areas which they don’t want us to use.
Or, as an alternative the supplies could be brought in by the driver relief cars, of which many transit the LAXCBC daily. 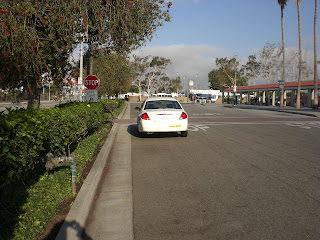 
Your brochure asked for my help, didn’t it? Well there you are. If all Metro employees were required to use the “system” every day, then they would be giving you ideas on how to improve the “system”, not this Mole.
Or you could hire this Mole, nah –the job is too political.
The Los Angeles Times weighs in(8) on the CA high-speed rail project, oh it’s the one with the $42 billion price tag which is to link San Diego with San Francisco. It appears that someone thinks that the line will carry between 88 and 117 million passengers by 2030. Wow! That is a difference of 35,000,000 passengers. Viewed from both sides of 88 million, there might be 117 million passengers or, to this Mole’s way of thinking, there might be only 53 million (88 plus and minus 35 million).
Whatever the case, we know that the politicians want to get their hands on the $42 BILLION so they can deal it out. We also know that the political forces for this non-LACMTA [sigh of relief] project want big ridership figures. Fortunately, there are those who want “… the authority [the California High-Speed Rail Authority] to reevaluate its plans.”
We’ve seen that in the case of the Gold Line and undoubtedly the same will apply to for the completely unnecessary money pit known as the Expo Line. How many people would show up at a “Cheviot Hills Demands Public Transportation” meeting? Duh.
Ridership between Culver City and Los Angeles should now be available from the values obtained on the 333 Rapid line which parallels a lot of the Phase I Expo Line route. It remains to be seen how many people would travel south, probably by some infrequently scheduled bus to link up with the Expo Line. That means that the passenger counts from the 333 Line are not necessarily good predictors of the Expo Line loading. I never understood why, if demand for the line the never-should-have-been was so great, exactly they refused to simulate it with a Rapid bus line. It the passengers are there and want to ride that particular route, they should jump at the chance to ride a Rapid Bus along a coincident salient. This Mole believes that the ridership projections made at the outset, will not be supported in practice –if the line is ever finished.