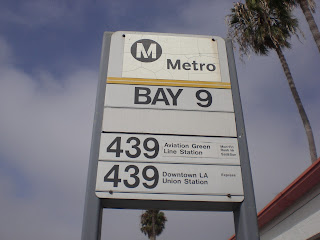 Broken Metro♪
The logo above is a legacy of Snoble but the organisation is pretty much in the hands of Leahy. The "M" inside the black ball is broken, right in the middle.  It is emblematic of an structure which is broken and ineffective.
The LACMTA is  broken to such an extent that we can only be thankful that they don't manage an airline.

Some times it is fun to play word games. So I took the boastful years-old phrase that the LACMTA likes to paste on everything, “America's Best”, and found that is anagrams to, among quite a few others, “Bacteria Mess”, of course, to be grammatically correct it should be Bacterial, oh well ....  [Anagrams by http://wordsmith.org/anagram/index.html ]


“Sire, this is not a riot, it is a revolution.” (1)
The Duc de La Rochefoucauld-Liancourt to Louis XVI
(15 juillet 1789)
The Mole reads the papers and other things, so you don’t have to.
Appropriate to the quote above, the French still now how to express their displeasure to their government. This is an action which Americans forgot, sometime in the 1970s, la Taupe believes.
As an example, when the Sarcozy government proposed raising the retirement age to 62, from 60 years old, the citizens reacted. Here is a link to a photo(2) which shows just one demonstration, in Marseille. < http://photo.lejdd.fr/media/images/societe/social/manifestation-marseille-journee-de-mobilisation-greve-retraite/1975159-1-fre-FR/Manifestation-marseille-journee-de-mobilisation-greve-retraite_pics_809.jpg >
La Opnión covered(3) another sad aspect of life in America, undernourished children. Here is a sampling: “Mala nutrición: Un mal nacional
En Estados Unidos, millones de personas no tienen acceso a una nutrición adecuada. … De acuerdo con la publicación de la Asociación Dietética Americana - American Dietetic Association – en Estados Unidos viven más de un millón de niños en hogares en los que no existen garantías de suplir sus necesidades nutricionales.”

This is truly a sad fact. Yet the larger society seems more interested in the escapades of Paris and Lindsey. The commercial news networks spend endless hours discussing the strategies and tactics used by political organisations in order to ensure their grasp on power. Devoting almost NO time to exactly what is needed. Our political parties do the same, sniping at each other without a thought as to the needs of average citizen in our country.”
Readers, it is not only the LACMTA which is broken.
This from the LACMTA handy Riders Guide(4):
“Tarifa básica de horas no pico para personas mayores de 62 años/ discapacitadas:
Tarifa de ida (cada abordaje): 25¢”
However they neglect to explaine EXACTLY which are the “horas no pico” en Español.. Oh, they didn’t explain the “off-Peak” hours in English either. Yet there were several “Press Releases” produced by “Metro Media Relations” in which they hype this, at best, mediocre work.

No escaping time dilation , get the slide below:
http://mica-vw.org/wiki/images/c/c0/Sr_timedilation.pdf
And listen to this MP3 recording:
http://www.mica-vw.org/wiki/images/9/93/Dr_Knop_30_May_2009.mp3
Cosmology
Here is an article which “explains” testing string theory. http://www.sciencedaily.com/releases/2010/09/100901091938.htm N.B. Reading this won't make you a string theorist, well, it didn't ake me one :-).
Time dilation is somewhat easier to understand, bottom line: More gravity and more speed work together, somehow, to effect time, More gravity slower time, more speed slower time. Ms Eryn Brown of the Los Angeles Times(5) does a nice job dealing with a difficult concept.

A woman drags a heavy bag and an equally heavy wheeled duffel bag into the LAXCBC, cursing all the while.

She approaches several people asking for something, without success. Finally she gets to me. Her body odor is BAD. I decline her request, as much to escape the smell as to deny her the money. Su Topo believes in helping the homeless, by making donations to established charities, such as the Salvation Army or to Fr. Boyle's organizations.

A tall athletic man bounces a ball around the LAXCBC. A man approaches him and begins to deliver a lecture on human nutrition, with an emphasis on amino acids. The athletic man responds in monosyllables. The lecturer continues and ultimately gives up only to watch his bus leave the LAXCBC, Now he faces a one hour wait.