Service Slashed♪
If one studies the partial map [(Metro System Map) from which this small sliver, above, is extracted], something that the LACMTA apparently did not do, one will find that two important links to the Metro “system”, which were provided by the 439 Line, have been severed. Since the 439 was the only way to link up the LAXCBC with West-side service from the CCTC and (sporadically) with Imperial BL Metro Service from Aviation station, those options are no longer available.

To assist you in understanding what the LACMTA has done, su Topo has spray painted out and created a kind of black hole, where there used to be transportation. Or perhaps a black trench is a better word. Thinking about trenches brings to mind the planned “Crenshaw Line”, which to this Mole is just another way to spend money to NOT get to LAX. 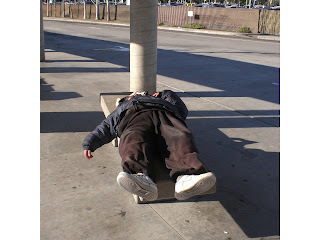 Homeless At LAXCBC♪
The person depicted above seems to be having a nice nap. But when one considers that it must be cold and uncomfortable sleeping on a concrete bench, few would want to exchange places.
A homeless woman with two luggage carts and two fairly large, well-worn, stuffed bears waits at the LAXCBC. She sits on the larger bear while the smaller one reclines on top of the larger of her two luggage carts.
201-12-13 The buses, except for some of the contract lines, had the new schedules on board. The schedules would be just great if it were 1980. But the feckless LACMTA could do much, much better. For example they could print a two digit code in small font at the start of route and end of route for each time line on the schedule. So, for a route that started at the LAXCBC and ended in Long Beach the time lines might look like this:
[75] 7:23 more times at stops which are time points 8:57 [73]

The numbers in brackets represent the percentages, 75 and 73 respectively and are represent the frequencies that buses are expect to leave and arrive on-time [please note that in my example these are imaginary numbers. This would be important information for a prospective rider who is evaluating several routes in order to determine which, in fact, is the more realistic one. That is, if the LACMTA could move out of the RTD era into 2011 and the 21st Century. The point here is deterministic transportation, i.e., “Describes a system whose time evolution can be predicted exactly.” [Source: dictionary.com] so that trips can be repeated in similar times.

And then it occurred to him how he might make one, and that was by tearing a great strip off the tail of his shirt which hung down, and making eleven knots on it, one bigger than the rest, and this served him for a rosary all the time he was there, during which he repeated countless ave-marias. But what distressed him greatly was not having another hermit there to confess him and receive consolation from; and so he solaced himself with pacing up and down the little meadow, and writing and carving on the bark of the trees and on the fine sand a multitude of verses all in harmony with his sadness, and some in praise of Dulcinea; but, when he was found there afterwards, the only ones completely legible that could be discovered were those that follow here:

Ye on the mountain side that grow,
Ye green things all, trees, shrubs, and bushes,
Are ye aweary of the woe
That this poor aching bosom crushes?
If it disturb you, and I owe
Some reparation, it may be a
Defence for me to let you know
Don Quixote's tears are on the flow,
And all for distant Dulcinea
Del Toboso.

The lealest lover time can show,
Doomed for a lady-love to languish,
Among these solitudes doth go,
A prey to every kind of anguish.
Why Love should like a spiteful foe
Thus use him, he hath no idea,
But hogsheads full--this doth he know--
Don Quixote's tears are on the flow,
And all for distant Dulcinea
Del Toboso.

Adventure-seeking doth he go
Up rugged heights, down rocky valleys,
But hill or dale, or high or low,
Mishap attendeth all his sallies:
Love still pursues him to and fro,
And plies his cruel scourge--ah me! a
Relentless fate, an endless woe;
Don Quixote's tears are on the flow,
And all for distant Dulcinea
Del Toboso.